At the end of a long, dirt road, about an hour and 15 minutes outside of Kigali, the Gashora Girls Academy overlooks Lake Milayi on 30 acres of beautiful land. This unique, upper-secondary boarding school is part of the Rwanda Girls Initiative and serves as an innovative and replicable model for educating girls and accelerating economic development in Rwanda.

When the members of the TechWomen delegation arrived at the Gashora Girls Academy, they were captivated by the school’s picturesque surroundings and campus, designed to be environmentally sustainable, echo local architecture, and support a thriving learning environment. They were welcomed by students, who each paired up with a delegate to give her a tour of the school’s dormitories, classrooms, and computer labs. Upon entering the dining hall, the pairs were greeted by Executive Director Peter Thorp, Headmaster Alain Munyaburanga, and dance and music performances by students at the school. Students at the Gashora Girls Academy welcome the TechWomen delegation with a festive dance performance.

Peter (whom the students called Mr. Peter) shared with the delegation the philosophy behind Gashora, which focuses on eliminating the impediments that exist to girls receiving an education. The school’s vision is for its students to graduate as inspired young leaders filled with confidence, a love of learning, and a sense of economic empowerment to strengthen their communities and foster Rwanda’s growth. The school believes that access to quality education creates meaningful difference not only in the life of a child, but also a community, and that increasing educational opportunities for girls is a key component to ending the cycle of poverty.

The TechWomen Mentors in the delegation then held a career fair for the school’s 270 students to encourage them to consider STEM fields as career option, as well as help them to understand and appreciate the importance of developing STEM-related skills in any career. They divided into three groups—Science, Technology, and Engineering—based on their fields and areas of expertise, and spoke to students about careers in in these fields. During these sessions, each mentor introduced herself, gave a brief overview of her field, and discussed ways to prepare academically and professionally. 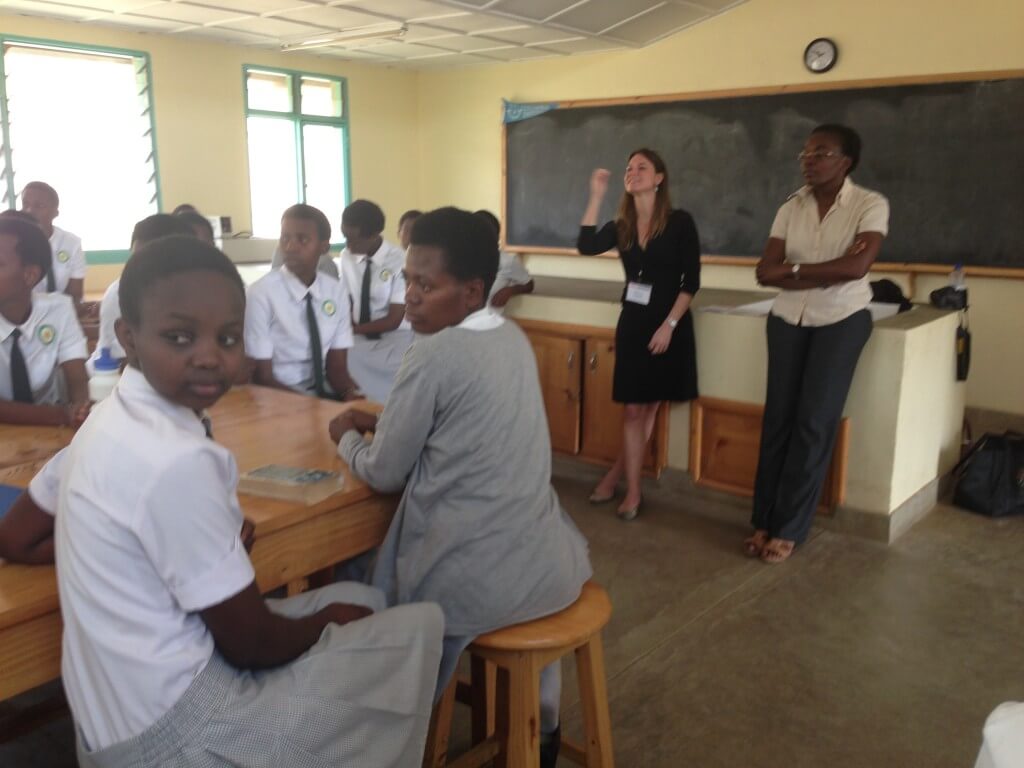 Bianca Liederer, a TechWomen Mentor from Genentech, and Joy Shivo, a 2013 Emerging Leader from Kenya, speak about careers in STEM at the Gashora Girls Academy in Rwanda.

Bianca Liederer, a Scientist in Drug Discovery and Development at Genentech, led a session on careers in science. She discussed her education path and career path and inspired many students with her fervent passion for science. “Science is life,” she said. “It’s everywhere.” Acknowledging that the biggest challenge to success in this field is accepting failure, Bianca advised the girls to be tenacious. She shared, “Every time you fail, you step back from it and look at it in a different way. You try again, and when it works, it’s incredibly satisfying.” She also encouraged them to never stop learning, “because in science you need to be on the cutting edge.”

After the career fair, the TechWomen Mentors divided into eight groups to lead workshops on interview skills. One of the sessions, led by Beth Steinberg, Vice President of Talent and Organizational Development at Sun Run, began with a hilarious interview with Peter, who mocked interviews in East Africa. He remarked that in these interviews, people start by stating their names, the number of children they have, their location of birth, etc. “Basically, stuff that doesn’t matter,” he joked. Then, Beth shared her advice:

Beth then asked the girls, “Tell me what you’re really good at—in one sentence.” This exercise was challenging for many of the students because it was very different from they were accustomed to culturally. However, with Beth’s guidance, they left the session feeling empowered and excited to perfect their personal pitches and interview skills. After eating lunch with the students, the TechWomen Mentors split into groups and held four hands-on workshops for girls at the school who studied computers as their major (or “combination,” in Rwanda):

At the end of the day, many delegates felt incredibly touched by the Gashora Girls Academy’s warm hospitality, inspired by the school’s unique model of building an education structure focused on partnerships and strong connections to the local community, and awestruck with the sheer amount of potential and talent among the girls at the school.